How One Doctor is Seeing Results with the Marco Equinox

Bruce Colton, OD shares his experiences with Dry Eye treatment using the Marco Equinox. The following are true patient cases and his patients are ecstatic over the results.

“I have a staff member with severe chronic dry eye associated with autoimmune diseases. She has had superficial keratitis every day for many years. Working for other optometrists over the last five years she has tried hot compresses, restasis, bandage lenses, punctal plugs, omega 3 vitamins, doxycycline, everything. I put an amnion on her which reduced her keratitis for a few days and then it came right back. The best acuity I could ever get her to was 20/40. I was given the Marco Equinox to use for a few days, and did a single 15-minute treatment on her. The next morning she said was the first time in years she has woken up without her eyes hurting or eyelids sticking to her cornea. She felt great, and a few days later I refracted her to 20/20. She still has a chronic condition which we have to manage, but the Marco Equinox light therapy has made a bigger difference for her than all previous treatments combined.”

“I have a male patient in his 50’s who has suffered from severe chronic dry eye for over a decade. He has been to many optometrists and ophthalmologists and followed all of their recommendations, which never offered more than very short term relief. He was paying hundreds of dollars a month for Restasis and Xiidra, hoping for a relief which never came. He carried a bottle of lubricant and used it every hour or two throughout each day. When I first took over his care I did not have the Marco Equinox technology. I used hot compresses, manually expressed his glands, which were rock hard, and put him on doxycycline. After a few months he felt 30% better, but was still using lubricant drops every two hours. When I got the Marco Equinox I immediately thought of him and called him in to do three 15-minute sessions and no other treatments. A month later all of his meibomian glands easily expressed a very high quality and quantity of oil, and he had completely stopped using his lubricant because he had no symptoms for the first time in over a decade.”

“I had a 6-year-old hispanic boy come to me with two huge chalazions on his right lower lid that had been there for months. They did not hurt, but they looked horrible, the size of marbles. He had already done hot compresses at the recommendation of his pediatrician, with no improvement. The mom was concerned because he would get a new chalazion every 6 months and it would have to be surgically removed. Every surgery would scar up a few meibomian glands that he could never get back. His long term prognosis for chronic ocular surface disease was very bleak. I gave him a 15-minute Marco Equinox treatment. A week later, the largest chalazion was 70% smaller. I couldn’t believe my eyes. We did another 15-minute treatment. A week later, the largest chalazion was 90% gone and the second chalazion was 50% gone. Of course, all of his other meibomian glands were now cleanly flowing. You can see where this is going. With two more treatments we got him to complete chalazion resolution, restored his gland function so he does not get any more chalazion in the future, and saved him the dangers of general anesthesia and excessive surgical destruction of all of his meibomian glands. I did this all with no drugs. No surgery. No high price tag. No risk. That is the Marco Equinox.” 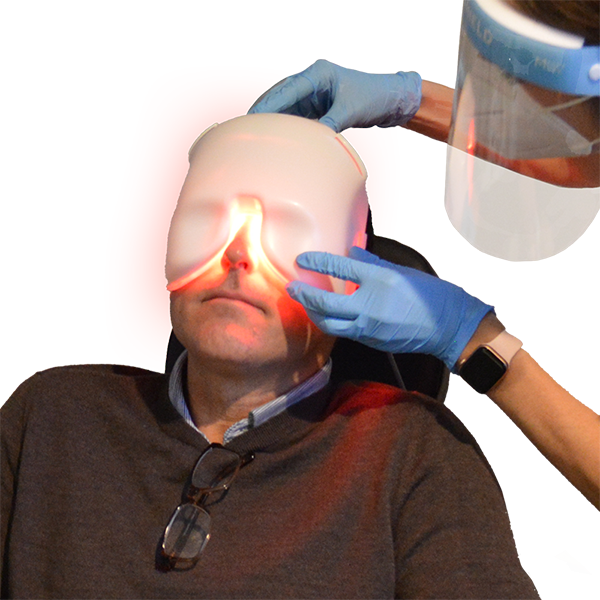